Sirex woodwasp (Sirex noctilio), also known as European woodwasp, is native to Eurasia and Northern Africa where it is typically a secondary pest of pine. In 2004, Sirex was first detected in the U.S., in Fulton New York, and was found the following summer in Ontario. Whether Sirex will become an economically important pest species in North America has been the subject of debate. Sirex has a long history of introductions into Southern Hemisphere countries including Australia, New Zealand, South Africa, Chile, Argentina and Brazil. In these regions, where pine is not native, it has become a significant pest in pine plantations. To date, Sirex has functioned between a primary and secondary pest here in Canada, typically not causing economic loss.

Biology
Sirex has an interesting and complex biology. It has an obligate relationship with a white-rot fungus (Amylostereum areolatum) which it carries in internal storage organs called mycangia. The wasp also manufactures a phytotoxin. After the female woodwasp lays an egg in a tunnel which she drills into the sapwood, she drills an adjacent tunnel and inoculates it with fragments of the fungus and with the phytotoxin. The fungus and the phytotoxin are thought to act together to stress the tree, killing susceptible trees. The phytotoxin then facilitates the growth of the fungus which is essential for larval development and nutrition. Developing larvae feed in the sapwood of the tree, creating galleries as they feed. They pupate in the outer sapwood, boring their way out of the tree the following year, or occasionally two years later.

Unlike many invasive insects species described in this website, Sirex has a number of natural enemies here in North America that are helping to limit its populations. Parastioids of native woodwasps also parasitize Sirex. Birds, both woodpeckers and aerial predators, consume Sirex larvae and adults respectively. A parasitic nematode, which functions to sterilize Sirex in other regions, is present here in North America however here it does not sterilize the woodwasp.

In contrast, poor silviculture, resulting in overstocked stands with an abundance of suppressed and stressed trees, can create favourable environments for Sirex. The woodwasp can also exploit short term stressors such as mechanical damage, weather related tree injury, herbicide use, cone harvesting or stand thinning. The presence of many favourable trees in a stand can lead to a local build up of populations. When this happens, Sirex will attack healthy pines, severely stressing them and predisposng them to future attack.

Trees at risk
All pine species are potential host trees for Sirex. The woodwasp has successfully developed in Scots, red, white and jack pine in North America, however it appears to favour Scots pine. Unlike native woodwasps, it attacks living pine though typically stressed, declining or dying trees. When populations build up, healthy pine may be attacked and killed.

Current range
Surveys show Sirex distribution is established in much of southern Ontario, as far north as Manitoulin Island and in a few locations in Quebec. It is also widely distributed in the northeastern U.S.

Detection
Resin beads (see photo on side bar) can be seen where the female woodwasp has drilled oviposition holes through the bark; at times resin may also be seen dripping from the oviposition holes. These signs are more common on the mid-bole of the tree. Occasionally female Sirex may be seen ovipositing (sidebar); they can be seen from late June through late September in Ontario but are more common from mid-July to late August. When a tree is successfully attacked, its needles become chlorotic, redden and then senesce (sidebar); this occurs in as little as 2 weeks after attack. Contrary to other reports, in North America, needles do not wilt after Sirex attack. Tree death follows in heavily infested trees.

What you can do
To maintain Sirex at an endemic level, follow good silvicultural techniques: use appropriate site selection for planting, timely thinning to maintain optimal stocking with removal of stressed, diseased or dying trees, implement operations outside of Sirex flight season (June to September in Ontario), minimize tree injury and salvage damaged trees early. 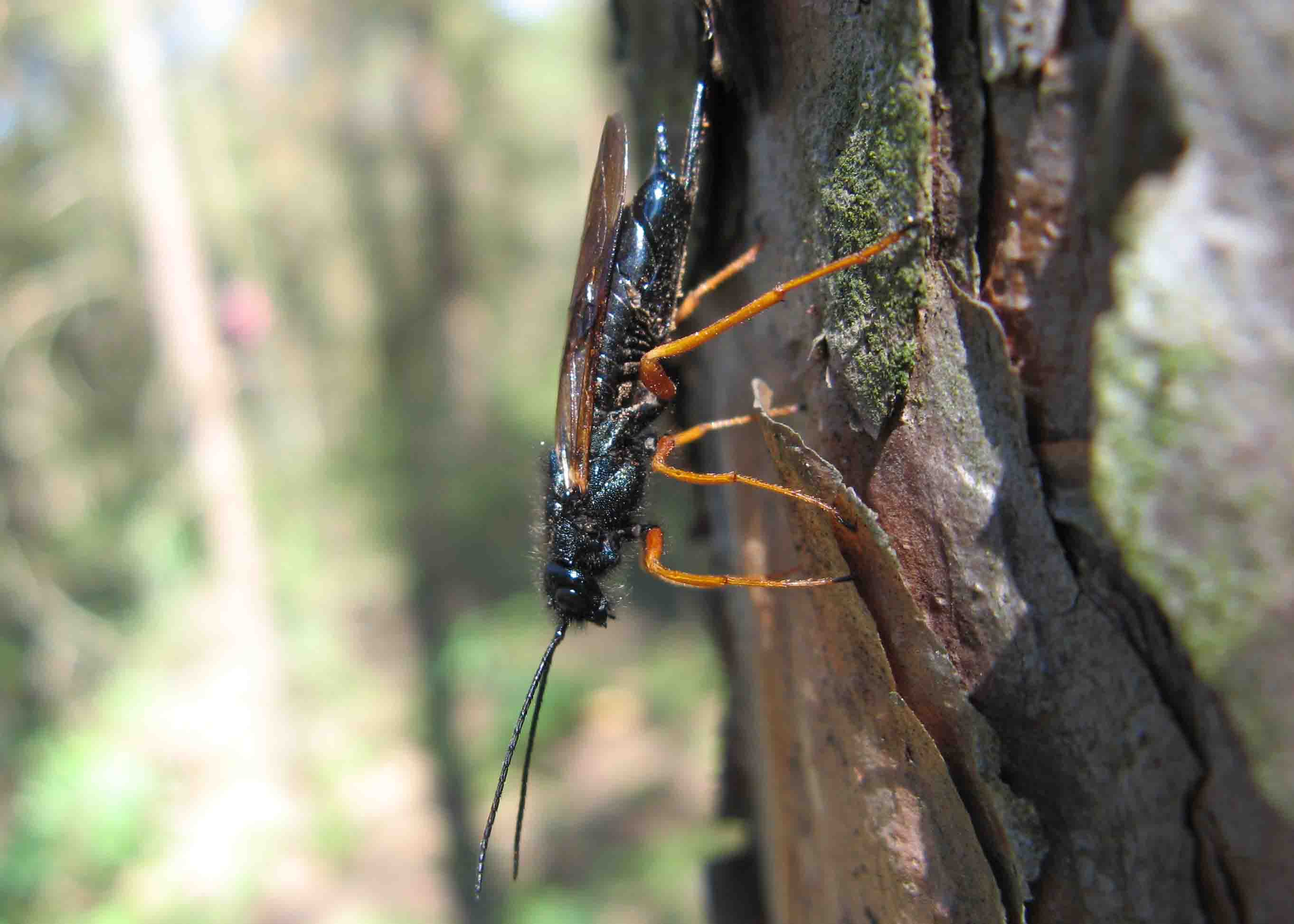